What is a Progress Test?

The Progress Test is an objective measurement to test students’ knowledge and progression. The medical faculties of Nijmegen, Maastricht, Groningen, Leiden, Amsterdam (VU and AMC) and Rotterdam work together to provide their students with relevant medical questions of high quality. During the Progress Test, it’s not the medical curriculum that is tested, but rather the broad knowledge that students picked up during their medical education. The Progress Test assesses the student’s readily available knowledge. Up until now, the Progress Test is made on paper or digitally by all medical students of the aforementioned faculties. The difference in knowledge levels between students is expressed as a test score.

In March my progress test result was Insufficient, but the standard for my cohort was lower at the previous December test; can my score be upgraded to Sufficient?

No that is not possible. Standards are calculated separately for each progress tests (see information about standards) and the standard of the December test applies exclusively to that test. It cannot be used to calculate outcomes on any other test.

The score I calculated myself differs from the official outcome of the progress test. What should I do?

You should first check whether you have included all key changes and cancelled questions when you calculated your score. Cancelled items are excluded when the percentage score is calculated (so if two questions are cancelled, you should divide by 198 instead of 200). If you still find a difference between your score and the official outcome, you should ask to look at your original test form. It is very likely that you will find differences between the original form and the copy you kept.

Initially, my test result was Sufficient, but after key changes and cancelled questions it is no longer so. Is there any way I can get a Sufficient result after all?

A key change can be advantageous to some students (their score changes from negative to positive) and disadvantageous to other students (a change from negative to positive). That is only logical, there was a technical error, such as a typing error in the correct answer when the test was prepared.
When a question is flawed (for example: both answer options are correct, or the wording was wrong) it is cancelled. That means that all plus and minus points scored on that question are cancelled as well. This is logical too. When a question is cancelled, 1 is detracted from the number of questions in the formula used to calculate the percentage score: for example: 200 becomes 199, and the percentage score is calculated by dividing the absolute score by 1.99 instead of by 2.

Some progress tests may turn out to be more difficult than others. Is it really possible to monitor your own knowledge development?

If you look at a series of PGT results, the development of knowledge shows clearly, both for groups and for individual students. It is true that PGTs can vary in difficulty, and this may lead to a bend in the line representing the (group or individual) Correct minus Incorrect scores as well as changes in test standards (since these are norm referenced). Nevertheless it is quite possible to measure progress over a longer period of time, because a series of tests shows a reliable tendency of knowledge development (see for instance Van der Vleuten CPM and Driessen EW. Toetsing in probleemgestuurd onderwijs, Hoger Onderwijs Praktijk, Wolters-Noordhoff, Groningen 2000, 9. 27-32).

Moreover, you can see how your score compares with the score of your reference group. This comparison indicates if your score remains constant, improves or deteriorates compared to the group average, irrespective of the difficulty of the test.

What is adaptive testing?

(Computer) adaptive testing provides students with a series of questions that is adapted to the student’s knowledge level. Since the difficulty of all questions is known, every student can receive a Progress Test that fits his or her knowledge. Such an individualized, automatically generated test has the benefit that it does not have to be made by all students at the exact same time.

How does computer adaptive testing work?

With computer adaptive testing, the computer selects questions from a large question bank. The selection of every subsequent question is based on the answer given to the prior question. For example, if the student answers a question correctly, the algorithm will select a slightly more difficult following question from the question bank. This process is maintained until the student gives an incorrect answer, which will result in the algorithm selecting a question that is easier than the preceding question. This performance-based selection of questions is sustained until the system has gathered adequate information to correctly estimate the student’s knowledge in certain disciplines. However, the blueprint (e.g., the Progress Test content specifications; categories and disciplines) of the Progress Test will not change compared to the ‘original’ version. The algorithm will still cover all disciplines.

The principle of adaptive testing is illustrated in the following figure: 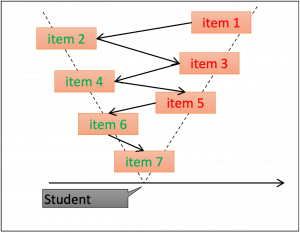 What are the benefits of adaptive testing?

Computer adaptive testing ensures a completely individualized test. The test is thus different for every student. Computer adaptive testing is a state-of-the-art technology that enables precise estimation of students’ knowledge in a short period of time. The number of questions that needs to be answered for this precise estimation is lower than before; only 100-200 questions are required.

In short, the most important benefits of adaptive testing are the flexibility that it creates and its precise measurements.

What changes about the questions with adaptive testing?

What changes about the testing with adaptive testing?

Why did the Progress Test approach change to adaptive testing?

The current Progress Test is a very long test consisting of 200 questions, with a maximum time of 4 hours. The test is based on the level of a basic medical doctor (‘basisarts’), which means that many students (especially in their bachelor’s) have difficulties answering the questions. Furthermore, the fact that all students have to make the original Progress Test at the exact same time forms a challenge logistically.

The adaptive Progress Test will be shorter and will offer questions on the level of the student. Adaptive testing has also been shown to be more efficient since students require less time to finish their test. The test score will not only be more informative, but will also correspond better to the estimated knowledge level. Additionally, the reliability of the test score is comparable to the test score of a two times as long paper Progress Test.

What will not change with adaptive testing?

The Progress Test will still be held four times per year. The rules for determining the end result at the end of the year will still apply.

What kind of questions will be asked during an adaptive Progress Test?

Who will encounter the Progress Test changes with adaptive testing?

All medical students studying at the medical faculties of Maastricht, Nijmegen, Groningen, Leiden, Amsterdam (VU and UvA) and Rotterdam will make the new adaptive Progress Test from September 2022 onwards.

What is different about the test score and feedback with adaptive testing?

Two things that will change, are:

The scale will be set up in a way that fits the scores that you’re used to as good as possible. The Prof system will provide graphical information on your performance relative to the entire cohort. Research has shown that properly analysing the feedback in Prof results in better performance.