Progress test scores lead to a qualification as: Insufficient, Sufficient, or Good. Standards are norm referenced, in other words, no pre-set standards are used.

Two standards are required for decisions about the three qualifications: the Sufficient/Insufficient standard (S/I standard) and the Sufficient/Good standard (S/G standard). The progress test measures the development of knowledge from the start to the end of the undergraduate medical curriculum. Each progress test is administered to six cohorts of students. For each bachelor cohort a standard is set, whereas during the master a standard is set for each measurement moment (12 in total).

After each progress test, the mean score (M), standard deviation (SD), I/S cut-off point (M-SD) and S/G cut-off point (M+0.5SD) of the %correct-incorrect scores are determined for each cohort (bachelor) or measurement moment (master). In this way six I/S and six S/G cut-off points are obtained. The I/S and the S/G cut off points are derived by determining the quadratic curve of best fit (the figure below shows an example, in which the measurement moments of the master are merged up to three cohorts). 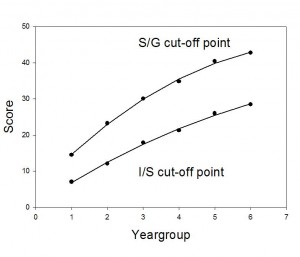 The standard key of the previous progress tests of this study year are published here when available.